Finally, last night we ran out of oil.  The gauge has been below empty all season.  We have begun calling our fuel oil "Hanukkah oil." Alan has been anxious to get rid of the pipes in his way; so this morning he got to work. 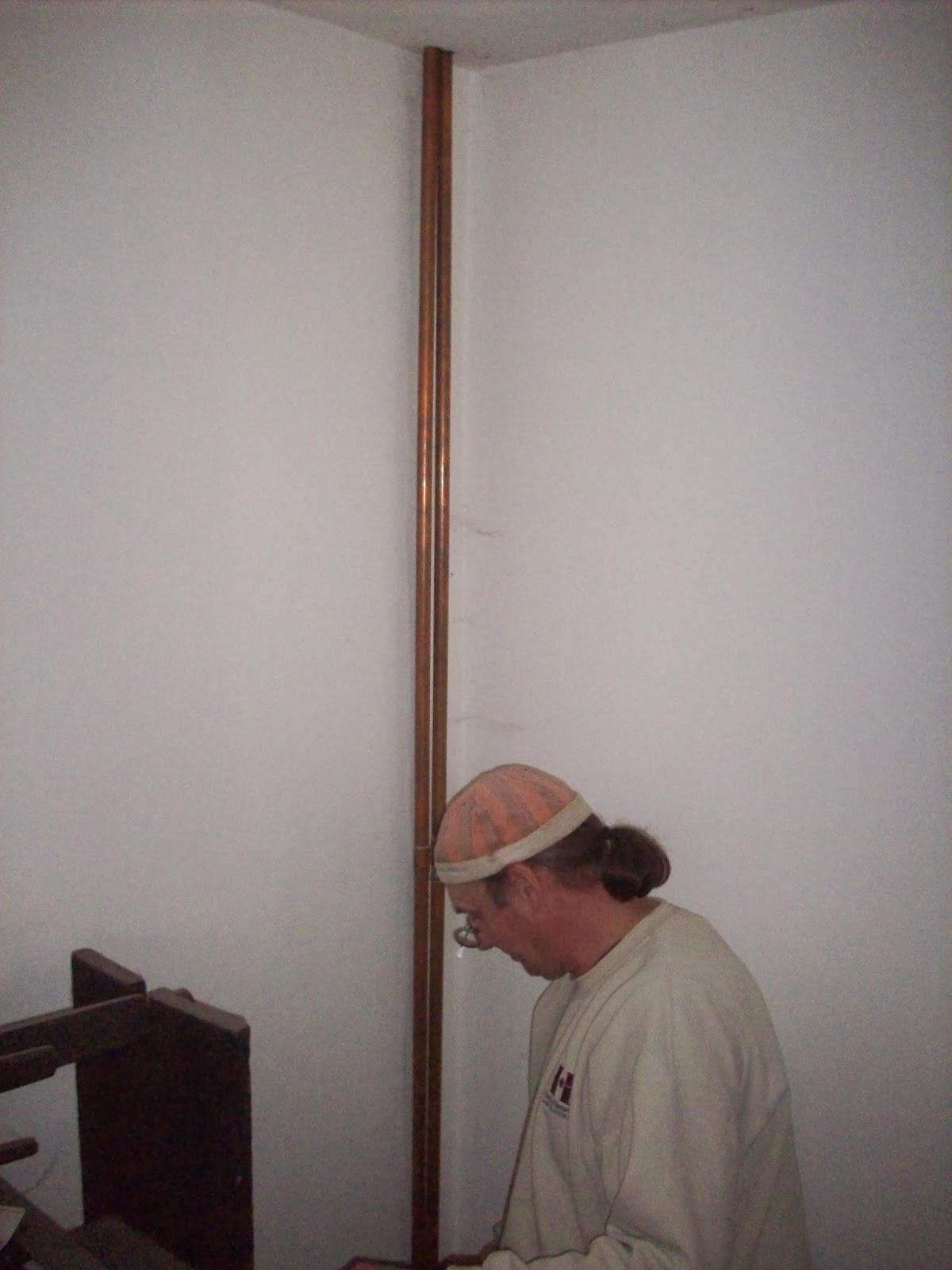 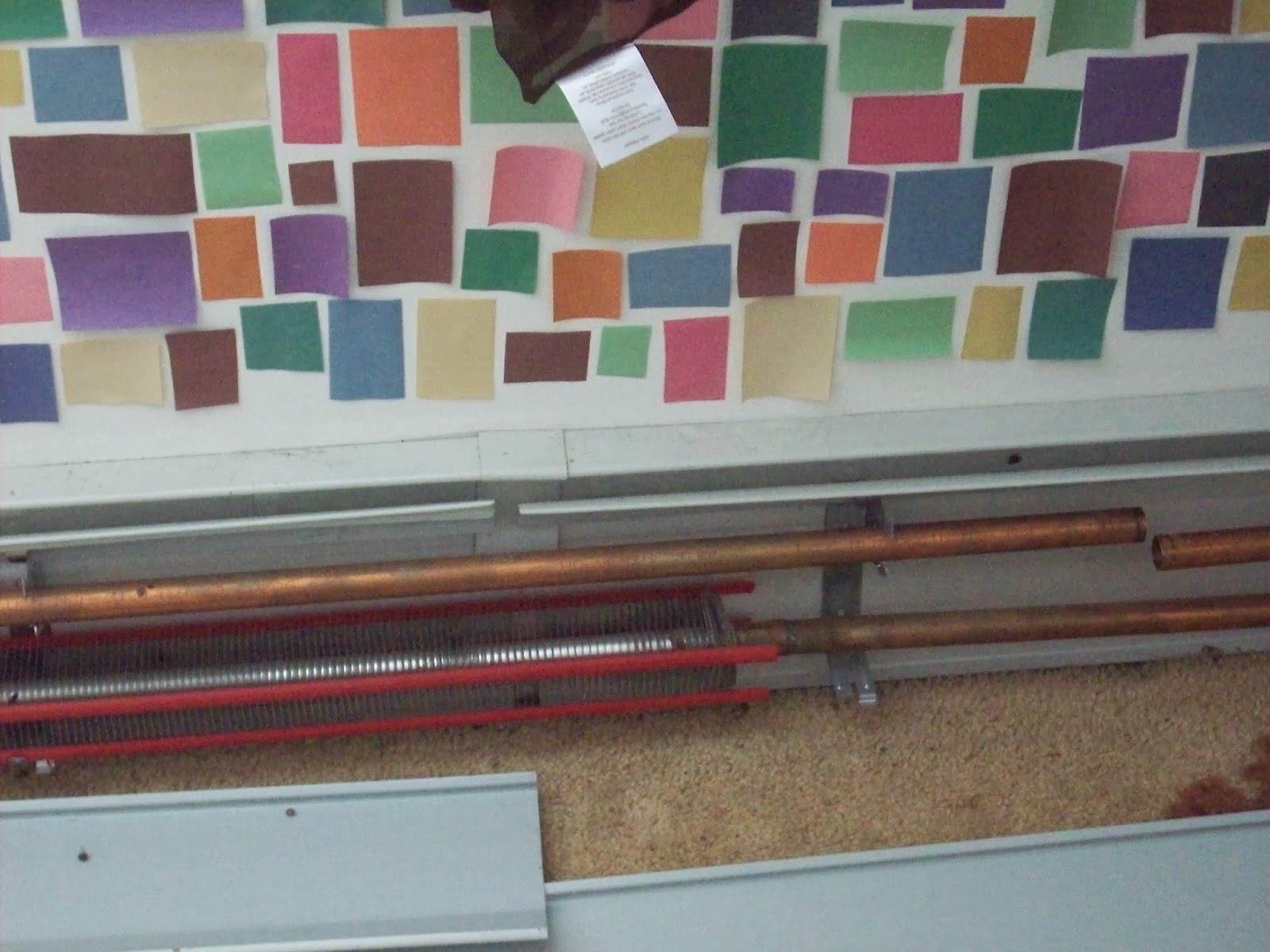 With the pipes out of the way, I can now get an outside freezeless faucet! We currently have one faucet in the garage and another in the basement.  Neither of which were useable in the winter.  No more filling up water jugs in the bath tub.

Down in the basement, behind the oil burner, Alan found a date stone as the base of the chimney. 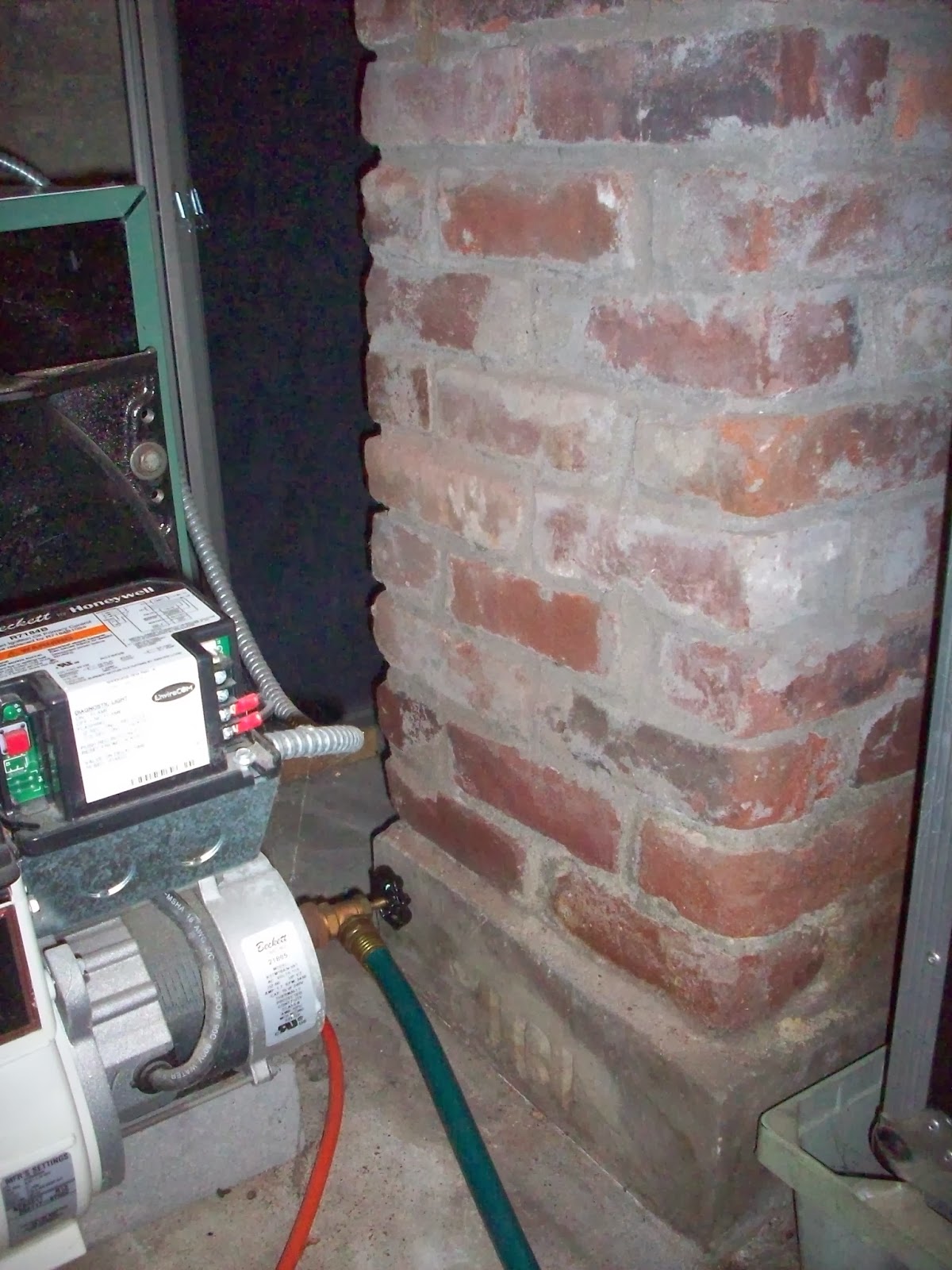 The date of 1912 predates the chimney by about 20 years.  We know the cabin that the chimney goes up through was moved to this location in the early 1930s.  So where did it come from? Oh those frugal Pennsylvania Germans. 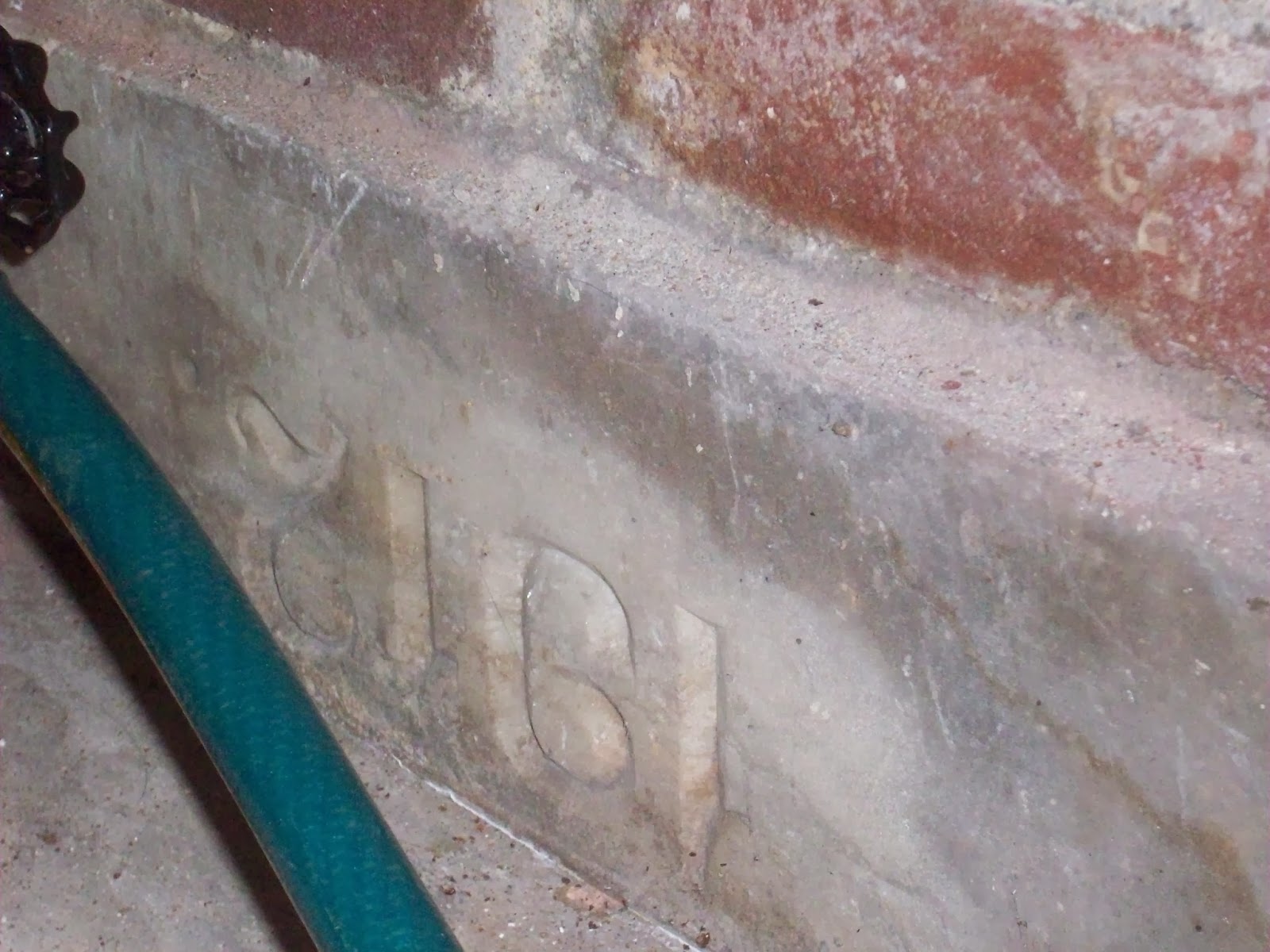 Posted by Erika keller at 8:59 AM No comments:

Email ThisBlogThis!Share to TwitterShare to FacebookShare to Pinterest
Labels: house

The air is full of the sounds of dripping water.  Its 40 degrees here and the news is filled with stories of porches and roofs collapsing. If I can think up something to worry about I will, so the thought of our roof collapsing under the weight of 18 or more inches of snow was keeping me up at night.
What's a girl to do? Why, go up on the roof and start shoveling.
The newest addition has a very shallow pitch roof that I could reach from two sets of windows upstairs.  It has a minimum of 18 inches of snow on it. 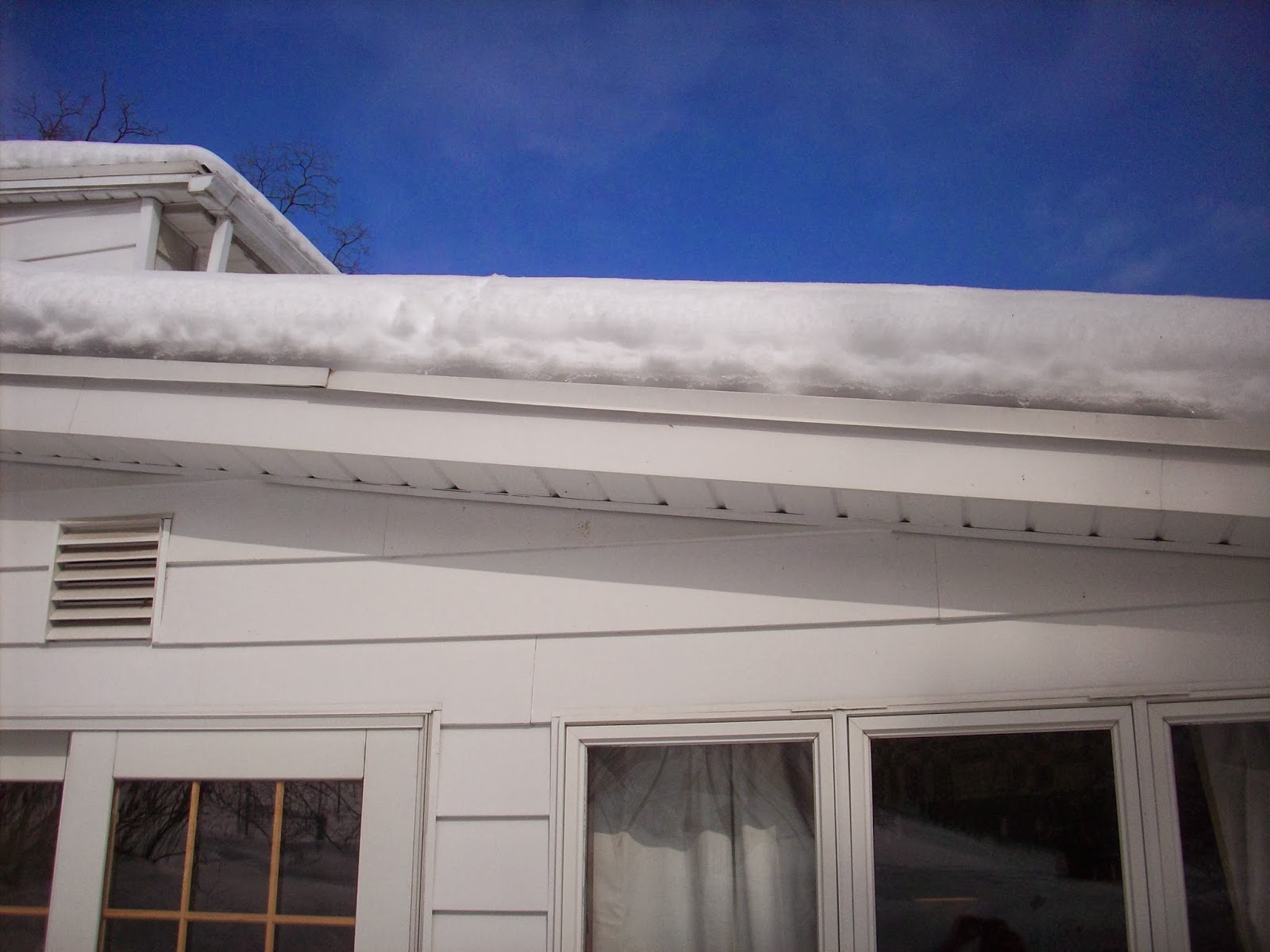 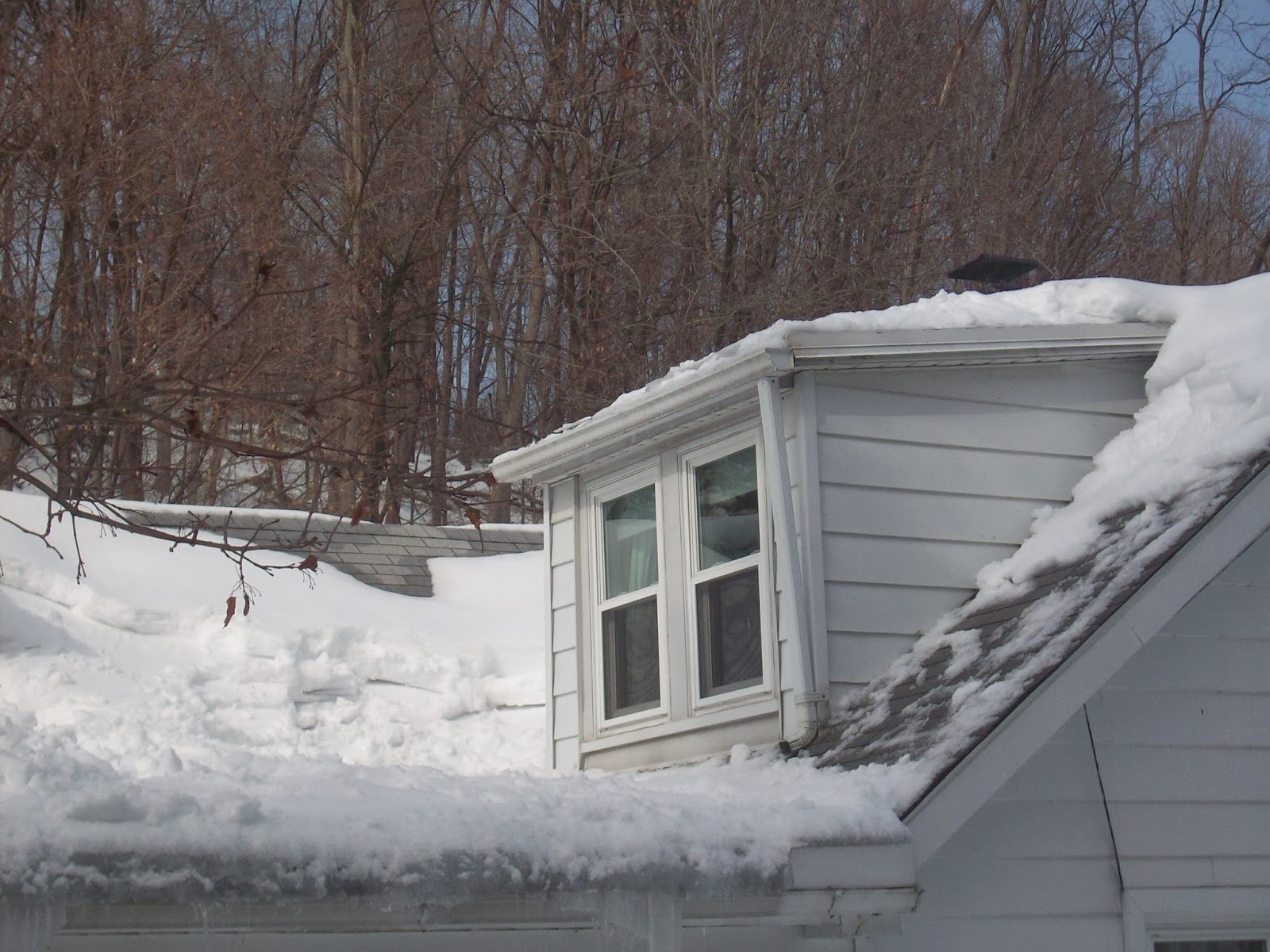 After climbing out this window I was able to get a good bit of snow off the oldest roof in the house.
The rain this morning also helped to make the snow even heavier.  I became quite warm up on that roof. I feel like I moved a half ton of snow.
Here is the pile of snow that came off the roof. 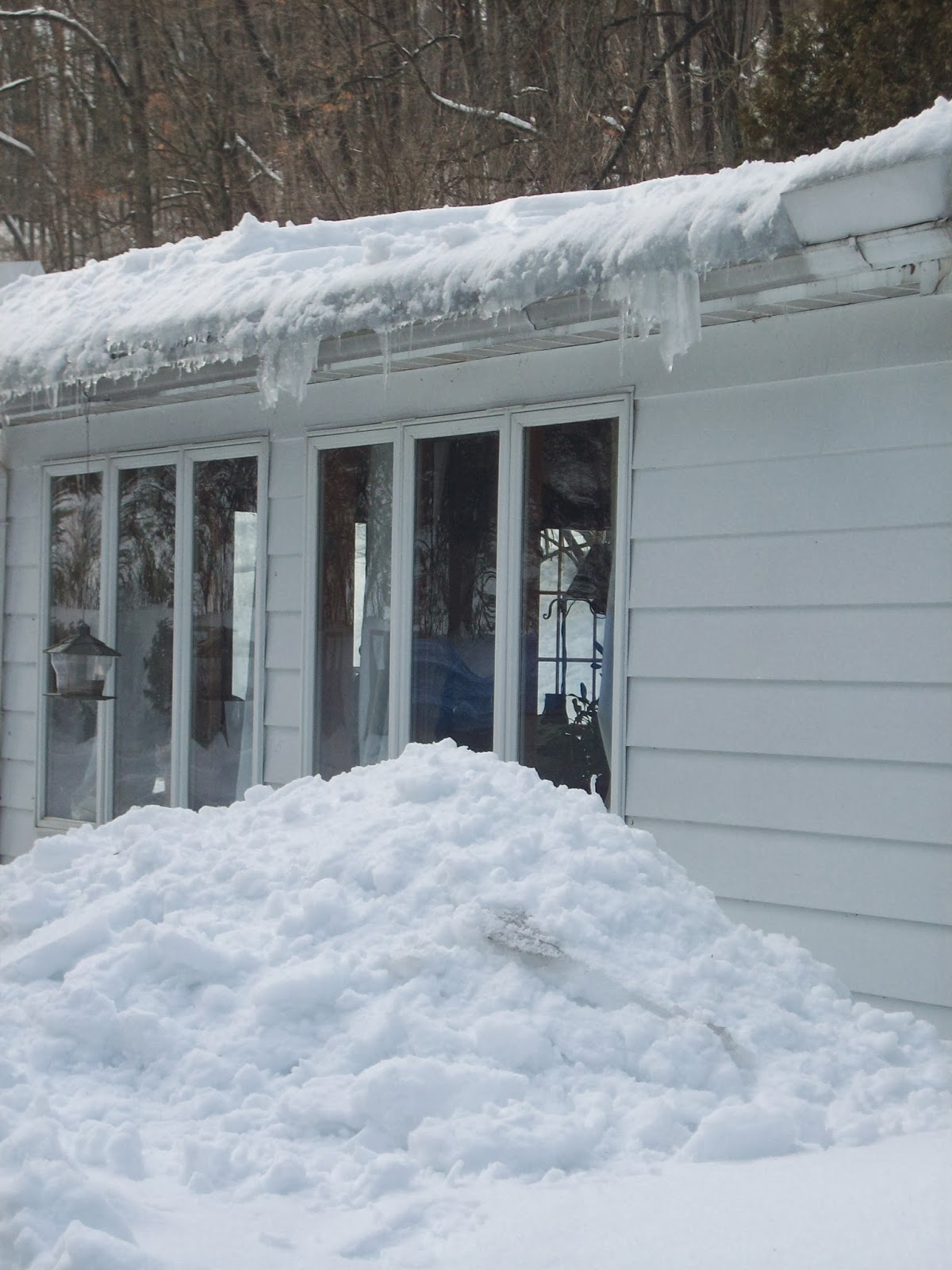 According to the weather forecast, our highs are supposed to be in the 40s and 50s until Sunday so hopefully the roofs will have a lighter load and no damage.

Posted by Erika keller at 11:43 AM No comments:

Spring will eventually come (it better!) 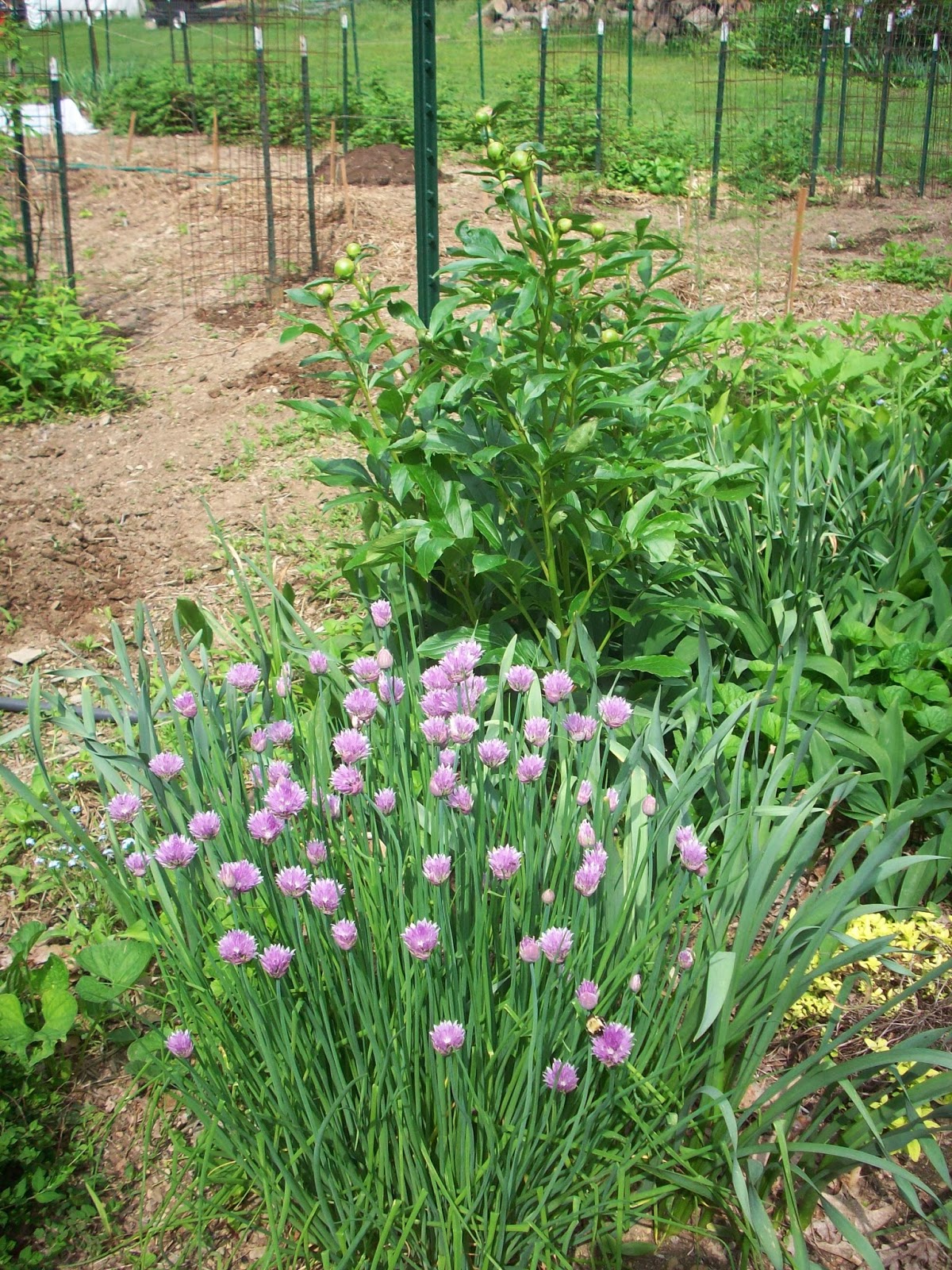 Although it doesn't seem like it now, with over two feet of snow on the ground; spring will eventually come and I must be ready.  Now is the time to reassess my seeds, garden plans, and what I learned from last year's garden. Since 2013 was the first year with a vegetable garden at the new house I learned a lot. Number one lesson being don't have your gallbladder out at the peak of harvest time. So here is a review in no particular order:
Onions- started too many; read you could plant them in bunches of three, but the ones planted singly did much better; while I like the taste of Ailsa Craig onions they didn't last very long; I must get the onions out of the garden when the tops die; it would be easier to plant seeds singly in my mini planters then have to detangle the roots to plant in the garden.  Definitely don't need to plant so many as I still have plenty left.
Tomatoes-can not plant them any where near the area where I grew them last year. The large walnut that fell down in Hurricane Sandy has poisoned the soil for tomatoes. If they grew better I would have had enough, but I didn't get more than needed for salads and cooking, none for canning.
Potatoes-we don't eat that many; need longer storage varieties; they were very happy with lots of leaf mulch; my star crop.
Thai pumpkin-too much space needed, too little harvest and too long to harvest, won't grow again.
Spaghetti squash- we don't really eat much, not worth the space.
Boston Marrow squash-makes great pumpkin pie, easy grower, good yield; but now I have a ton frozen so I won't need to grow any this year.
Sweet Meat Squash- harvested two very small squash, I guess it really doesn't like my growing conditions, although the vines grew great.
Peppers-slow to start then took off, great harvest on all varieties, hot and sweet. Didn't seem to mind the walnut tree area but were a little farther away than the tomatoes.
Tomatillos- great but don't need five plants. Two would be fine.
Collective farm woman melon-how could you go wrong with  a name like that? The rabbits loved the new plants and they had trouble getting going, never did very well.
Black beans-grew great, but left too long to harvest, should have just pulled out the plants and hung them in the greenhouse until I could shell them; must make black bean chili.
Corn- the popcorn did great and actually works. Sweet corn grew well and tassled a little too close to the popcorn, tasted bleh. But hey, I've never had enough sun to grow corn so this was amazing. And the goats liked the stalks.
Green beans- ready to harvest when I was having surgery, not the beans' fault, will try again this year.
Basil- grew fabulously! Definitely will grow thai basil again too.
Cucumbers- did OK, need better supports.
Sweet potatoes-started slips early but they took forever to get going, probably too cold upstairs in the unheated guest room, will start slips near the woodstove this year.  The three slips I grew last year yielded sweeter sweet potatoes than the slips I bought.
Broccoli- did great under row cover, very buggy not under row cover.

Things I want to make sure I do this year:
I never did plant any root veggies so I need to make that a priority this year.
I also didn't plant much in the way of cover crops.  The oats I planted around the tomatoes were all eaten by the birds.  The clover was eaten by something unless it was under the row cover.
Need to do more with row cover.
Have ordered these hot kaps for keeping new plants/seedlings protected from rabbits/birds.
Need to get shade cloth for the greenhouse.
Must get started now!

Posted by Erika keller at 8:54 AM No comments:

Oh joy, more snow today.  So far, as of 12:30, we have around 12 inches.  They have changed the predicted snow fall to 14-20 inches.  At least it is not -3 degrees like yesterday morning when I went to work.
Here are some pics of the snow so far: 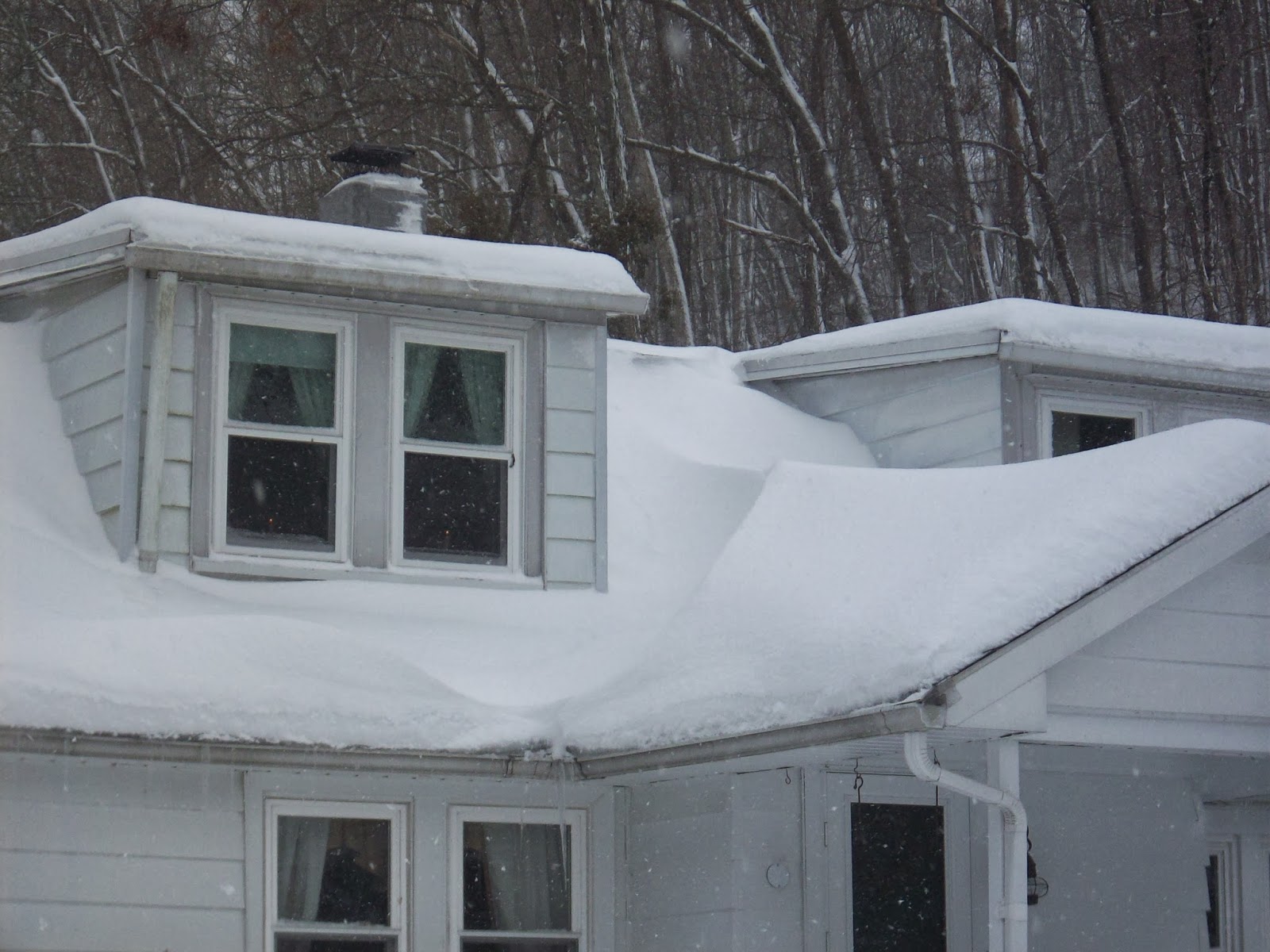 The wind is creating some interesting drifts. 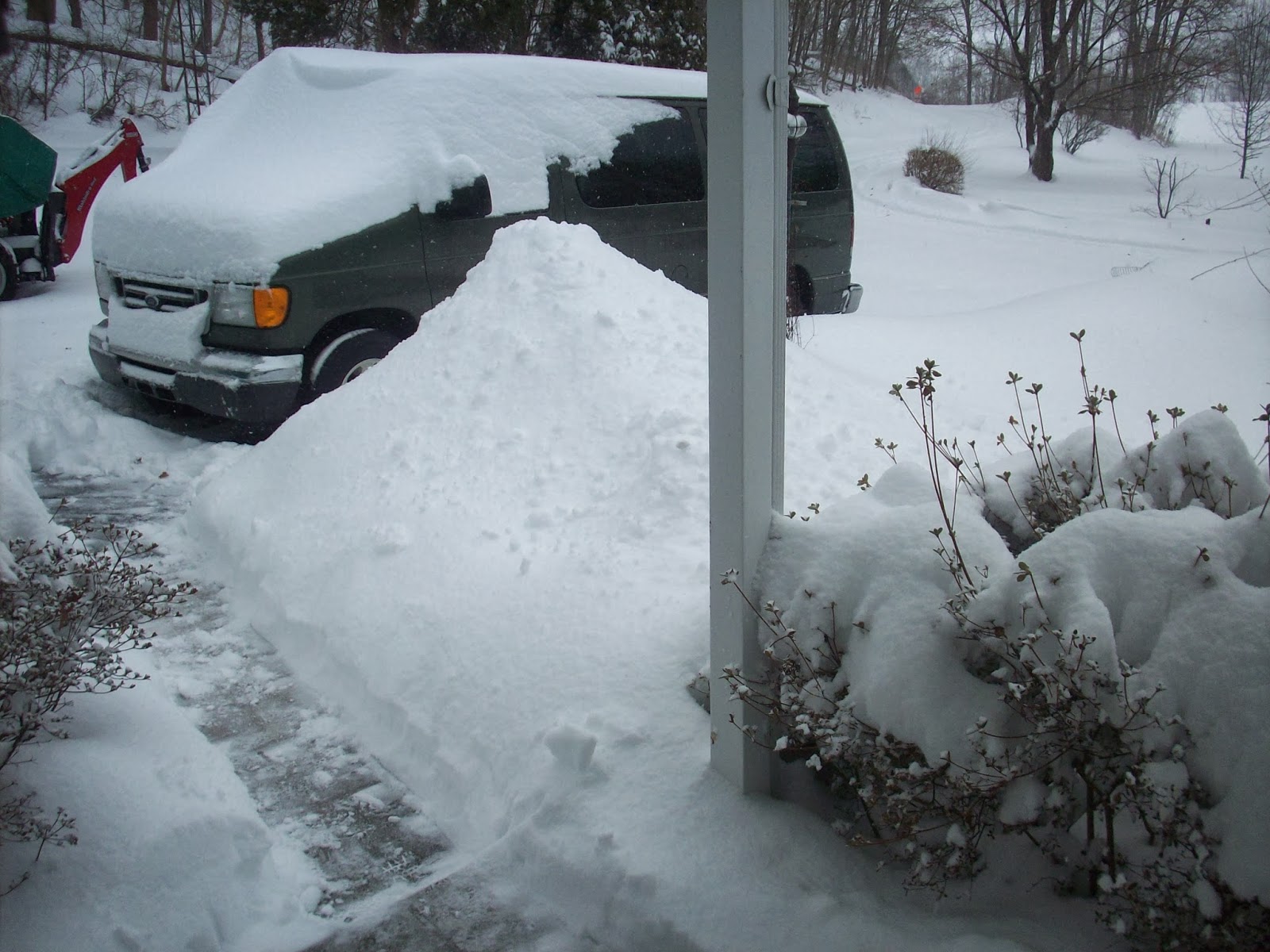 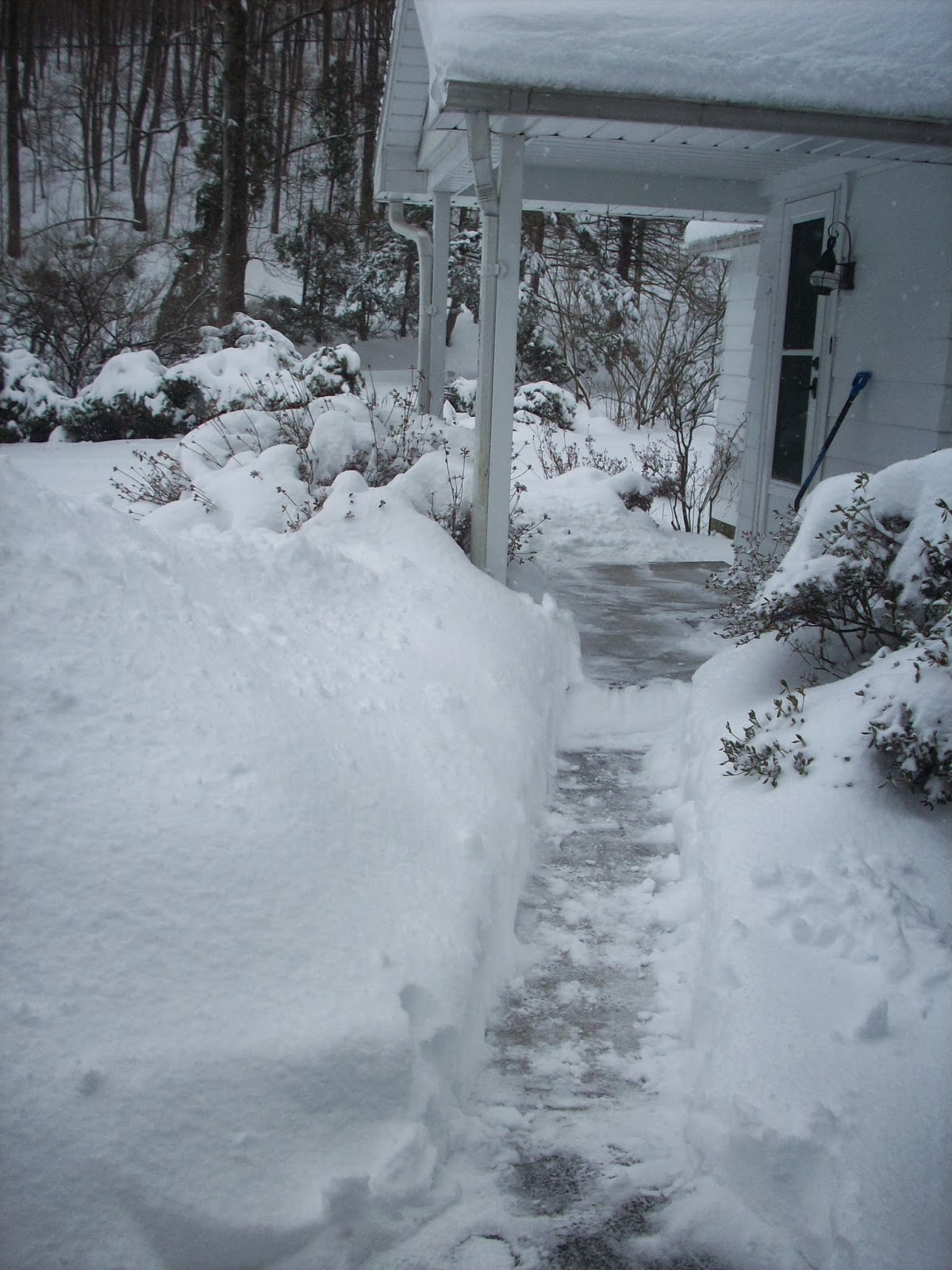 Cool view to the back of the property. 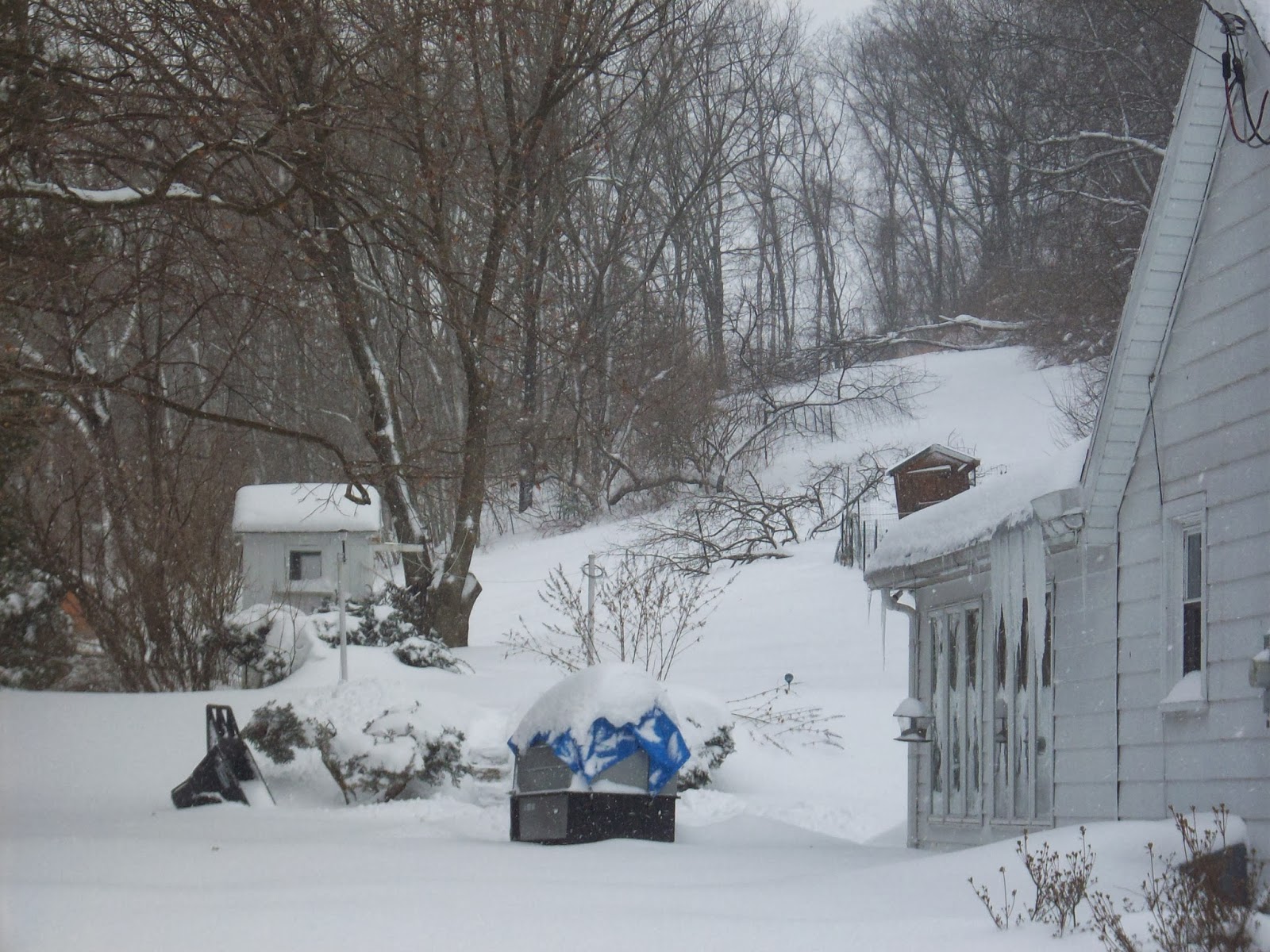 And my favorite stairs could turn into a tunnel. 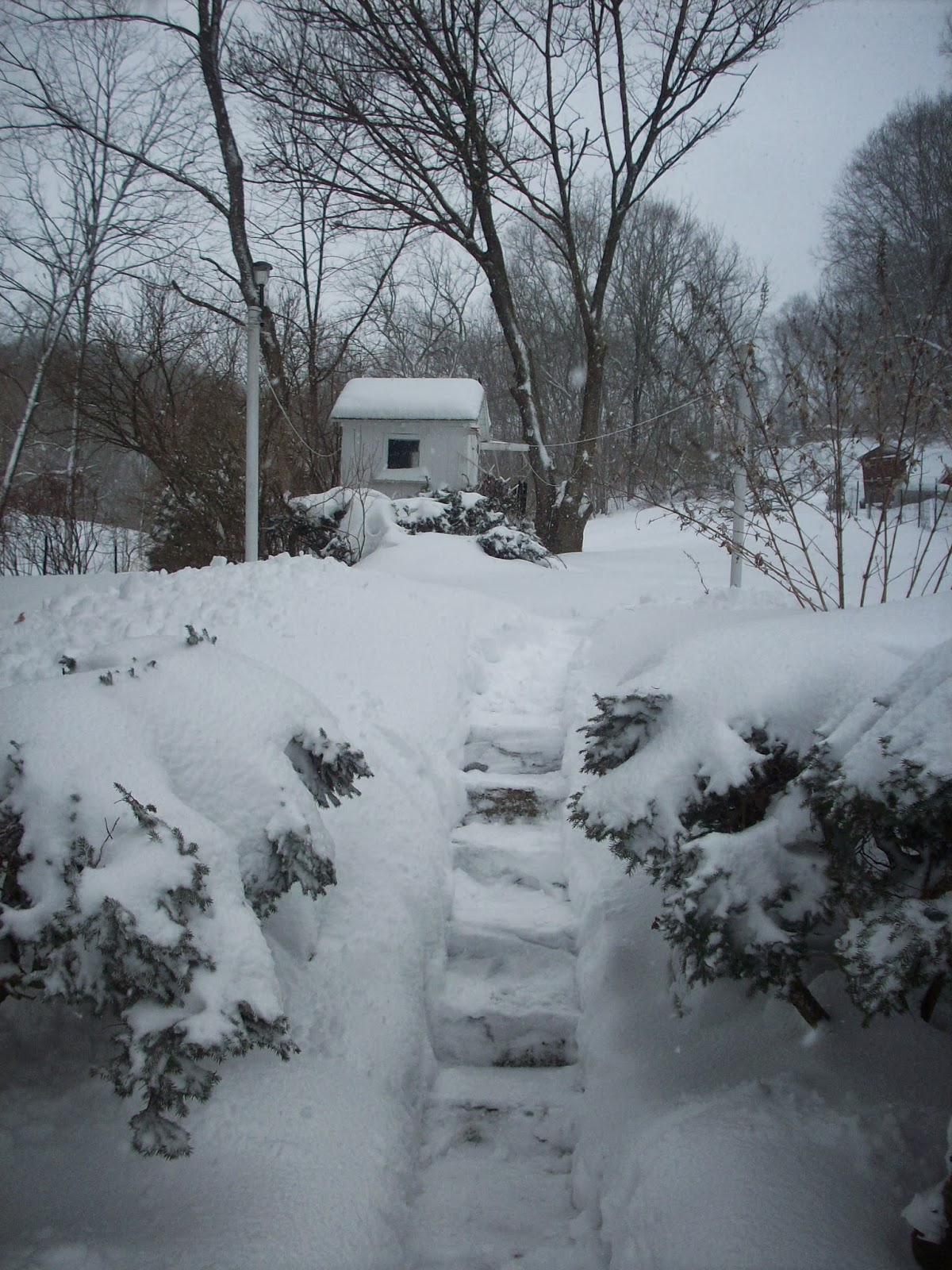 Email ThisBlogThis!Share to TwitterShare to FacebookShare to Pinterest
Labels: snow

Tuesday night into Wednesday morning we were lucky enough to add a 2-3 inches of snow then 1/4 inch of ice to our snow fall totals.  We lost power on Monday with the first snowfall, 7-8 inches, of this week; and again on Wednesday.  Thankfully, both power outages only lasted a few hours.

Poor birds were not able to get to their feeder. The ice melted enough yesterday and then froze last night to make a stiff crust on the snow.  You either slide around on top or sink down into a hole in the ice. And the only way to get around without sliding is with ice crampons. 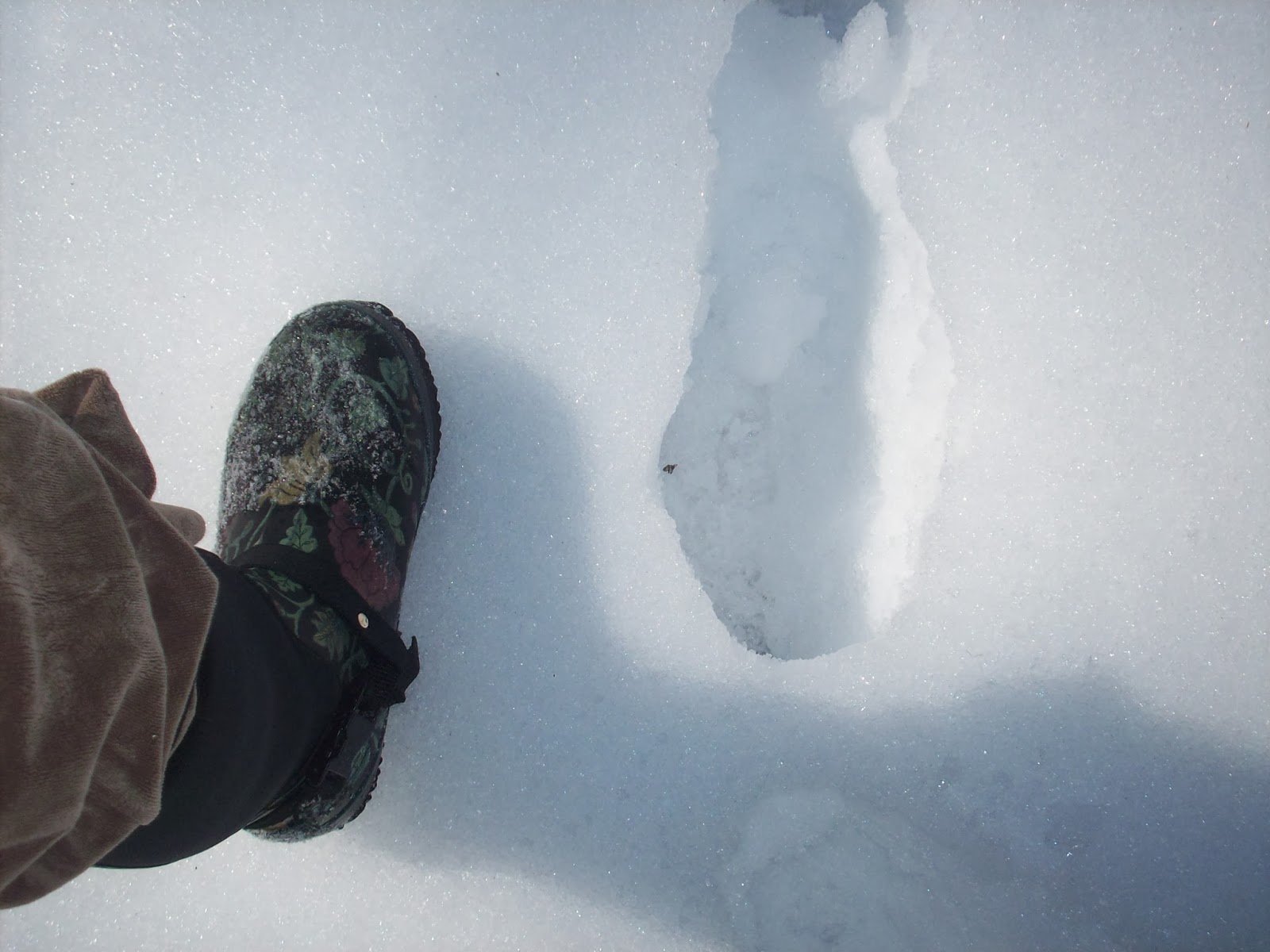 The ice on the trees has melted from the sun on the hillside facing south, but the trees on the north facing slope are still covered. 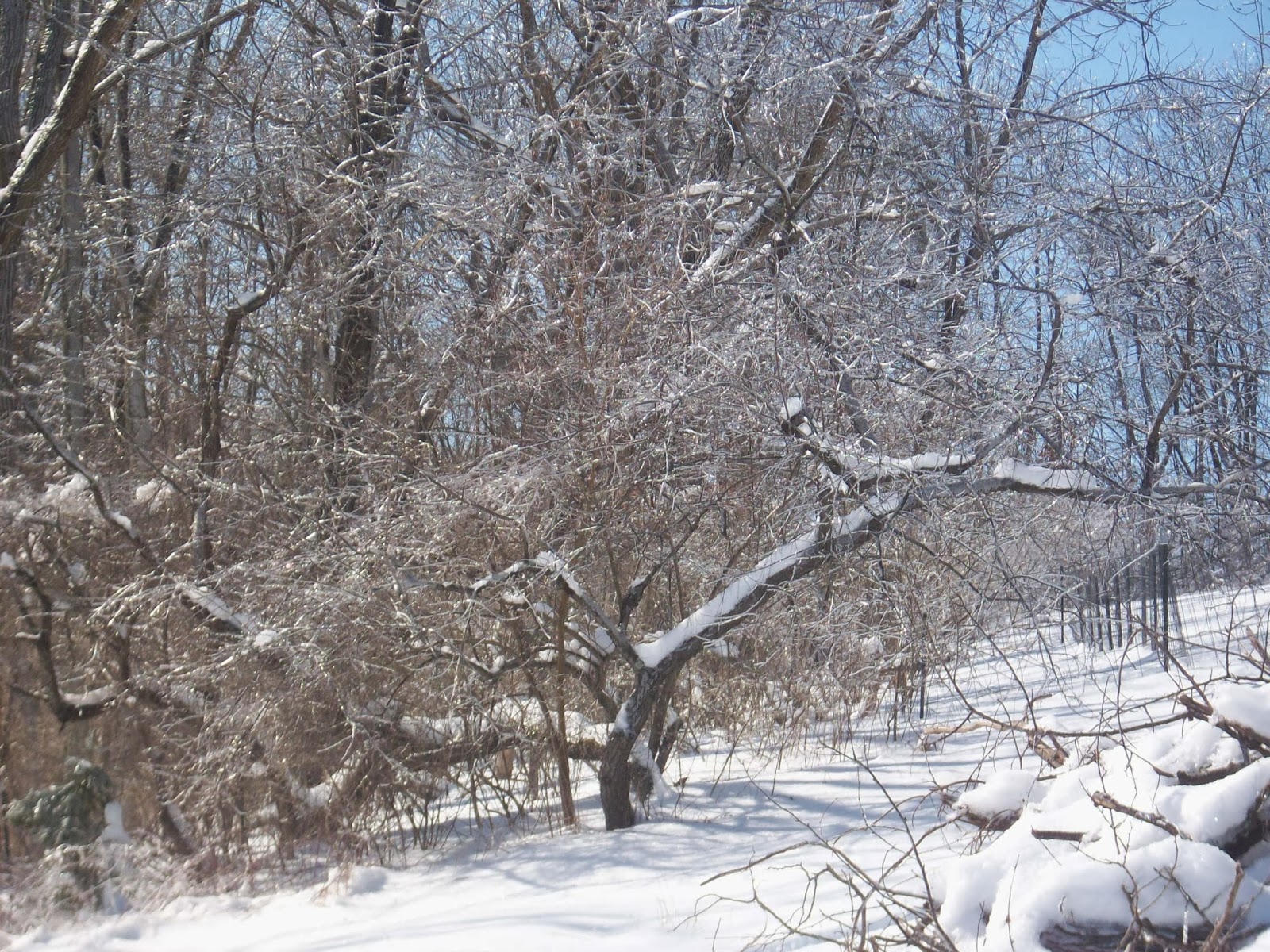 The fences have created some very interesting ice structures. 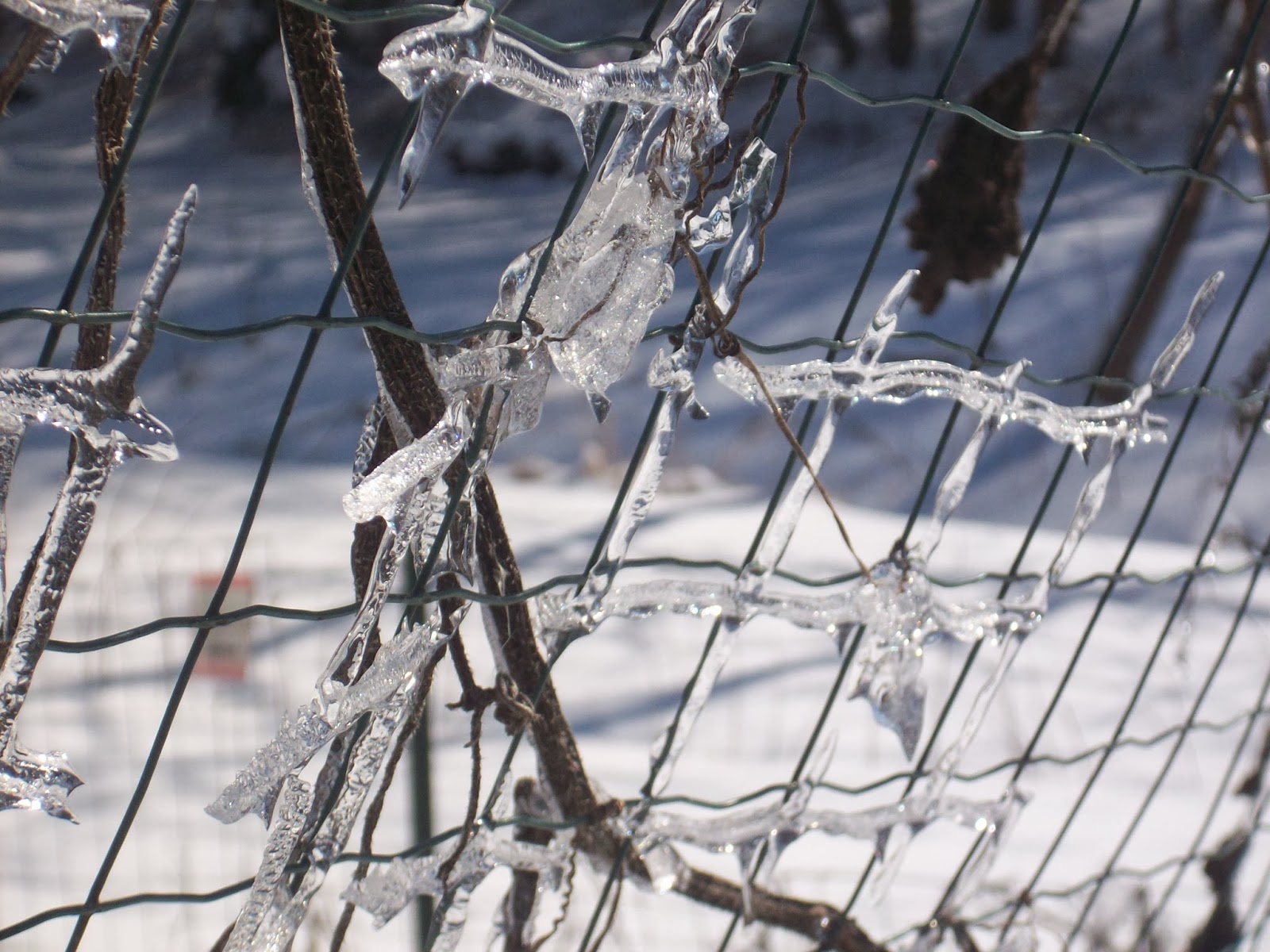 But, spring is coming! This month its time to start the onion seeds and the sweet potato sets.

Posted by Erika keller at 5:02 PM No comments: